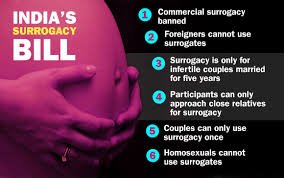 On 19 December 2018 the Lok Sabha passed Surrogacy (Regulation) Bill, 2016. Earlier the bill was cleared by cabinet in 2016. It was subsequently referred to a parliamentary standing committee (Health and Family Welfare) before it passage.

This bill States some rule to control surrogacy in the country and has completely banned the commercial surrogacy, only allowing for altruistic surrogacy.

Surrogacy is an arrangement, often supported by a legal agreement, whereby a woman agrees to become pregnant, carry the pregnancy to due term, and give birth to a child or children, all of this for another person or persons, who are or will ultimately become the parent(s) of the newborn child or children.

Commercial surrogacy: – The term generally refers to any surrogacy arrangement in which the surrogate mother is compensated for her services beyond reimbursement of medical expenses.

Altruistic surrogacy: – The term refers to an arrangement in which a woman volunteers to carry a pregnancy for intended parents without receiving any monetary compensation in return.

Highlights of the Bill:-

What is the bill aim to do?

The bill allows only altruistic surrogacy (by relatives) for married couples. It seeks to put an end to commercial surrogacy (payment to surrogate mother) and also has safeguard built in against sex selection of the baby. The bill proposes to allow altruistic, ethical surrogacy to intending infertile Indian married couples between the age of 23-50 (female) and 26-55 (male).

It limits the option to only legally married childless couple who have been trying for a child for at least five years. the commissioning couple cannot have a surviving child is biological or adopted, except when they have a child who is mentally or physically challenged or suffers from a life threatening disorder with no permanent cure.

Was the bill necessary?

There have been several reports about the commercial surrogacy and exploitation of surrogate mothers, women who are kept inside in hostels during pregnancy and not allowed to meet their families during the pregnancy. Many women who do it definitely for a salary amount does putting their own body at risk. The bill seeks to put an end to that. An estimate by Indian Council of Medical Research (ICMR) show that around 2000 odd babies per year for commercial surrogacy, when a woman is paid or prefix sum for renting her womb. Confederation of Indian Industry’s figures says surrogacy is a 2.3 billion USD industry fed by lack of regulation and poverty. The 228th report of the Law Commission has recommended prohibition of commercial surrogacy. Commercial surrogacy is allowed only in Russia, Ukraine and California. The bill now requires all services clinics to be registered. Clinics can charge for these services but the surrogate mother cannot be paid .The national and state surrogacy board will be regulating authority.

What Maternity benefits would a commissioning be entitled to?

The bill does not take that into account it deals with the rights and responsibilities of intending parents and surrogate mother and the baby but does not address maternity benefits of a commissioning parent from her or his employer. These are covered by labour laws. The law on Maternity benefits does not take into account the possibility of a woman becoming a mother without actually giving birth.

Issues related to the surrogate mother being a ‘close relative’

Some other laws define terms such as ‘relative’ or ‘near relative’. For example, the Transplantation of Human Organs and Tissues Act, 1994 specifies that a living donor has to be a ‘near relative’. It defines a ‘near relative’ to include spouse, son, daughter, father, mother, brother or sister. The Companies Act, 2013 defines a ‘relative’ as: (i) members of a Hindu Undivided Family; (ii) husband and wife; or (ii) other relations prescribed under the Act.